Living in central North Carolina makes both the ridges of the western North Carolina and Virginia realitively close.  Notice I say ridges, I am out for the views.  Being a farmer and working outside all day I don’t need to get outside to walk around in the woods, hell I can do that here at home.  I want to get up high and see some views!

There are exceptions, but with in a 4-5 hour drive, if you want to do good size loop hikes, it comes down to only a couple of locations.  The Great Smoky Mountains National Park (GSMNP) or the Mount Rogers National Recreation Area in Virginia.  We try to avoid the Appalachian Trail because of the number of people using it but inevitably we end up using it for parts of loops and cobbling it together with side trails or bushwacks to make it work.

Some of my favorite loops come from running the ridges around the head of a watershed if we can find the right combination of trails.  This is why the AT as a major trail on some of the major ridge lines works as a component.  Examples of this are the Standing Indian area, many of the Great Smoky Mountains N.P. park drainages like Big Creek, Eagle Creek and Forney Creek and the area around the Priest and Mount Pleasant in VA (which is the headwaters of the Piney River).  The Fires Creek Rim Trail is another classic.

So you can see from the trip reports that there are a number of trips (over 30) using the AT and it includes most of the trail in NC and southern VA.  During deer hunting season we retreat to GSMNP, which is why there are so many trips there during Thanksgiving.

I try and go to places I will not run into many people so you can also see that I have done a lot of walks on the Black Mountain range, which is neither on the AT or well known by most people.  The highest ridge on the east coast with 6 of the 10 highest peaks east of the Mississippi.  It is my mid summer retreat, even though I have hiked it in most all the seasons. 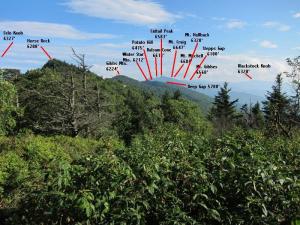