We were planning to go to Virginia but the forecast was for 60 mph winds up on the ridges so we turned south to Congaree National Park for a more mellow trip, at least we thought it would be.  Bob and Stan had been a few years ago and raved about the huge old growth trees.

It was a beautiful clear day with temperatures in the 60’s when we made it to the visitor center.  We got our free backcountry permit that allows us to camp anywhere south of Cedar creek and 100 feet from any trail or major water feature.  We had really light packs with no rain gear or tarps.  We did carry a little more water as the water from the sloughs, guts, ponds, lakes and creeks can be a bit nasty but we did plan on refilling tomorrow from Cedar Creek.  A few miles in we encountered a Park Service person who tests the water and he said no problem using the water, just purify it.

The whole park is only 26,000 acres but has the largest area of old growth bottomland forest in the US of about 11,000 acres and one of the tallest temperate deciduous forest canopies remaining in the world.  There are 25 champion trees, the largest found in the United States, within the park.  It is flat as a pancake with maybe 5 feet of elevation difference from the Congaree River to Cedar Creek.  We would walk nearly all the trails plus some.

Off about 10:00 we started with an easy saunter down the old Sims trail, an old road bed 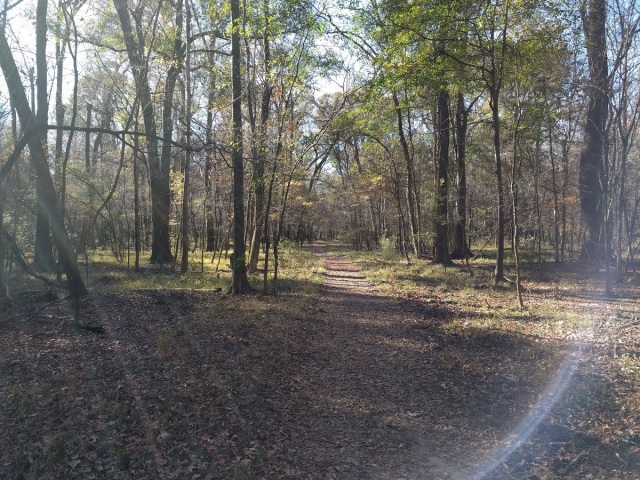 We picked up the River trail and started seeing many huge trees which are impossible to take a good picture of, Stan in the wings of an oak

One of the biggest Beeches we saw.

We took the northern part of the loop and eventually got around to the river which I somehow didn’t get a picture of.  The water levels throughout the park were fairly low which made cross country work more possible.

We paralleled the river for about a mile and when the trail turned back north we headed off trail, sort of along an old road that continues along the river for a mile or more and finally stopped to camp near Deep Jackson Gut, about 9 miles today.  No fires allowed so Bob did not have the perfect food.

Another clear day and we start by heading due north, cross country, to intersect the River trail, smooth sailing with only a few diversions to work around. 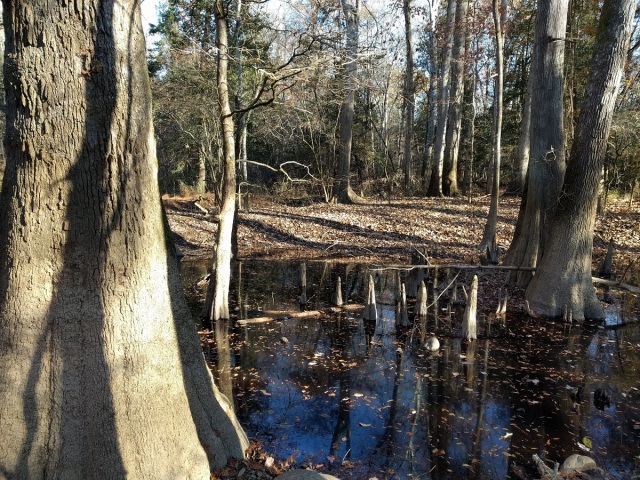 Easily found and then we turned east when we hit the Oakridge trail.  After a bit we went off trail again to look for one of the giant Bald Cypress trees, fun walking through all the Cypress knees sticking up.

We found the group we were looking for

And we think this is one of the biggest ones in the park, well over 100’ tall.

On to the western end of the Kingsnake trail where we stop for lunch and to get more water from Cedar Creek.  After lunch we wind along the trail passing many huge Loblolly Pines and this near champion Cherrybark Oak 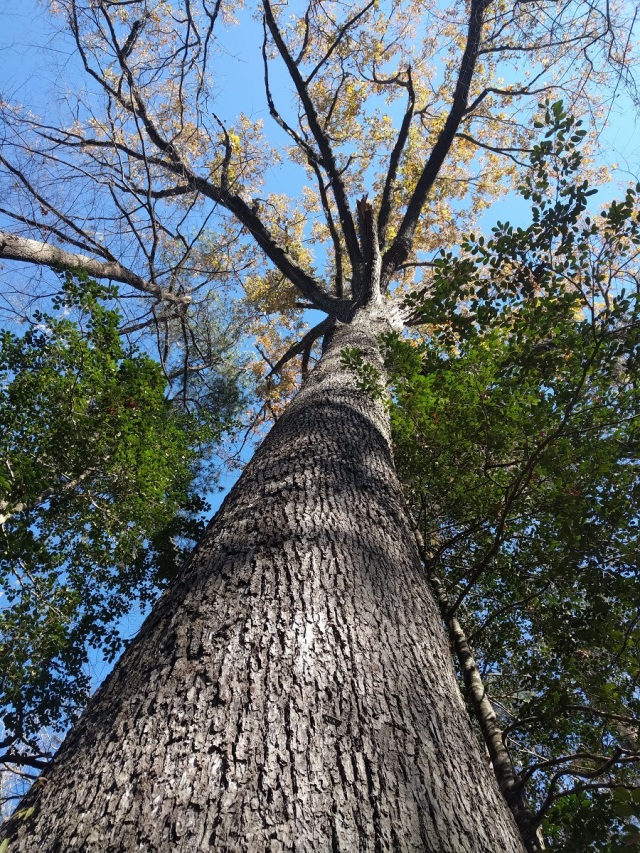 When we hit the trails turn to the north we go south, along what is the continuation of the old logging road hoping to get to the river to camp.  We encounter a day hiker who lives in the area and has spent a lot of time in the park.  He is going down to Old Dead River Lake and tells us the old road we are on eventually just peters out after Running Gut and before the river.

They have a problem with wild hogs in the park rooting up the area and we found this hog skull along the road, look at the tusk on the left side!

Sure enough we get to Running Gut where the bridge is out and where Bob and Stan turned around last time because the water was too deep but today we found a fairly easy way across.  Shortly after the road does disappear so we just dead reckon in a southerly direction without taking any kind of bearings.

We cross a few drainages and nothing really corresponds with the big hand drawn map we have and we are not going to make it to the river anyway so we find a nice elevated area amongst some huge trees and settle in for an enjoyable evening.

30 degrees this morning and still clear but clouding up.  We head out about 8:00 in a northwesterly direction as that is where we roughly came from last night and this is where the fun began.  Finding the end of the old road would be difficult as it runs north-south and we were trying to come up to the end of it.  More huge trees with the wide bases from so much time in standing water.

After a while we figured that we had gone too far west and so headed East thinking we would cross the road but instead came to a large drainage that we assumed was Running Gut which we followed east thinking we would come to the washed out bridge where we crossed it yesterday but came out at the southern end of Old Dead River Lake instead.

It is east of the old road so we thought it would be easy to follow it back west to the road so off we went, knowing we needed to be on the other side of the Gut eventually, we crossed this downed tree when the chance appeared.

Somewhere along in here my phone with the Gaia GPS app died prematurely (a known issue with this phone), didn’t really matter as it had not been able to get a fix on our location anyway.  We got to a point along the Gut that didn’t look right according to the map so we decided to just head north.  If we were too far west then we would run into the Kingsnake trail and if we were too far east we would run into Cedar Creek.

Stan and I both pulled out our compasses and off we went.  Pretty quickly we realized that Stan’s was reading way off so put it away and mine did not have the declination adjusted and we didn’t know what it was here so we knew that we were heading not exactly true north but it would be close enough.

By now we had been wandering around for several hours without finding the old road.  We remained calm knowing we had several handrails we would eventually hit but it was very disconcerting.  We did have Stan’s phone but it was about out of juice and was not picking up a signal.  Even if we did get someone at Park HQ how would they find us, we could only generally say where we were and if they flew over it would have been nearly impossible to see us down in the 100 foot plus trees even with no leaves.

We continued on north for almost two more hours with fairly easy walking and only a few wet areas to work around until we finally hit what we were pretty sure was Cedar Creek and it corresponded to a place on the hand drawn map.  We turned west and in 10 minutes we hit the north-south section of the Kingsnake trail.  Woohoo!  We are back to known territory.

We had about 4 miles back to the Park HQ and the truck and were running behind schedule so we put the hammer down and made back in an hour by 1:00 just as it started to rain lightly.  Boy were we lucky, no rain gear or tarp!

If you look at the map below, the old road (not shown) goes south from the turn of the Kingsnake trail past the N and G of Congaree to the Gut of Running Gut and then turns a bit eastward.  After finding Old Dead River Lake we never went far enough west to find the road and just paralleled it all the way up to Cedar Creek, even with the compass uncorrected for the 8 degree west declination difference it did not take us far enough west.  We basically went from just west of Old Dead River Lake, between the G and A in Congaree to Cedar Creek, just to the west of the word Cedar on the map.

This was the most lost I have ever been in 50 years of backpacking so what went wrong?  First we were over confident in being able to find our way back to the old road and did not take any kind of bearings the night before when we left the old road.

Second we had no real map and no landmarks we could see, only big handrails of the river and the creek, if you look at the pictures of the terrain it all looks the same with no way to know where you are unless you spent a lot of time in the area.  It was good we found Old Dead River Lake as it did pin point us at least for a minute.  The USGS maps are no use as they show no detail.  The only good map of the park is the big hand drawn one you can buy at the park which is really pretty accurate with a ton of information but it is hard to tell how to scale it is.

Third we were kind of relying on the Gaia GPS and it totally failed us, fortunately we did have the big map and compasses.

Fourth we had not left our plans with anyone, only the general “we are going to Congaree”, even the park staff did not know where we were going to hike.  I also did not really study the maps as Bob and Stan had been there before.  How much trouble could you get into its only 26,000 acres.

We were lucky that the water levels were low and that we didn’t encounter any big blow downs or areas we couldn’t walk through easily on our way north.  Even without knowing the declination we could maintain a straight line and not wander around in circles which is what people do left to their own internal compasses.  We stayed calm but it was maddening all the same.

Now Bob wants to go back and make it to the river from the old road and then bushwack all the way up river to the River trail.  If we do we will be ready for it!