Stoves through the years

I have used and been around a lot of backpacking stoves over the years but have only put my money down on seven.  The five shown here are the ones I have left, the sixth was a very early Primus canister stove that used canisters you just punctured like a basketball pump to connect the canister, probably a bit sketchy in hind sight.

The first picture is in cooking set up with fuel bottles/canisters but without wind screens, if they need one.  The second picture is in their collapsed, ready to pack mode, with their respective wind screens.

In comparing stoves you have to look past the manufacturers listed weights because sometimes it just includes the burner.  Make sure you include the weight of the empty fuel bottles/canisters, windscreens and anything else that makes the system work most efficiently.  So my weights include all that.

Back in the day it was easy to choose a stove, there were only a handful to pick from and really only a couple that were light and dependable, the Svea 123 being the standout that almost everyone owned, not so any more.  When deciding on which stove, it comes down to what kind of “cooking” you do, what season you are hiking in, what kind of fuel you prefer/can get and how many people you are cooking for.  There are also other considerations like how much you want to fiddle with your stove and how dependable it is/needs to be.

For me good, warm food morning and night are one of the important parts of the experience.  That means we actually do more than boil water for some meals, mostly dinners, so I need a stove that simmers.  That quickly reduces the stove choices to a canister stove or only a couple of liquid fuel/white gas stoves.  The “we” part means I am hiking with usually one other person, sometimes more, so we share one stove and pot and cook meals together.  Saves a lot of weight and time.

Also because I almost always hike in cool or cold weather I need a stove that is dependable, easy to use with cold fingers, probably in the dark and does well in windy/cold conditions.  Again canister stoves excel here, remote canister stoves even better below 20 degrees F.

A note on windscreens, pots, and fuel efficiency.  Almost every stove needs a separate windscreen for best fuel use and lightweight aluminum or titanium screens are the normal choice.  Additionally the windscreen should be sized for the pot, either exactly (like the Caldera Cones) or with about 1/2″ clearance around the pot to allow the heat to run up along the sides of the pot (see the picture above).  I use an 8″ tall Trail Designs Varivent cut to size (for the diameter of my pot) and with an opening on the side to both keep the canister from overheating and to access the fuel control handle.  If the canister is so hot you can’t leave your hand on it, you need to vent it more.  Proper flame control (most efficient) is not wide open but only to where the blue flames just barely cover the bottom of the pot (or a little less) but not running up the sides.

Short wider pots are more efficient than tall skinny ones.  While titanium is sexy, pot’s made from it have very thin walls and don’t cook as well, resulting in more easily burned food and while usually, but not always, slightly lighter they are 3 times the cost of a good hard anodized non-stick aluminum pot.  If you only boil water then titanium might be a good choice but just for a tiny weight savings.

If I was to buy a stove today it would come down to four choices.

Or something like the Olicamp Kinetic Ultra Titanium if you are worried about the pot supports, only 1.7 ounces. 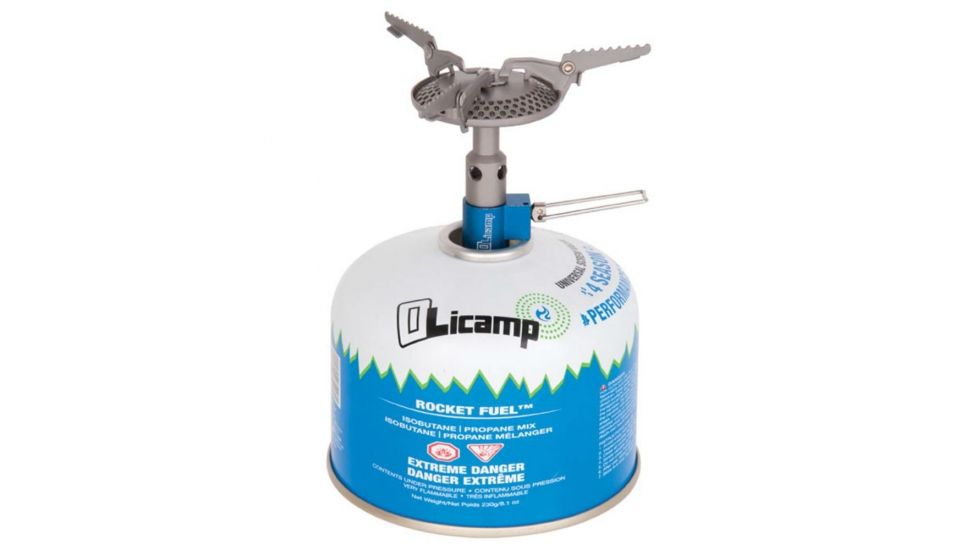 Obviously I am a fan of Optimus products.  I have great disdain for all MSR liquid fuel/white gas stoves as being poorly designed, difficult to deal with, especially in the cold, and generally too heavy.  I have been on too many trips with other peoples MSR stoves that broke, parts wouldn’t fit or other difficulties that lead to potentially cold food or worse and that is not acceptable.

1 Response to Stoves through the years