The last trip of the winter season had it all: highs, lows, pain, beautiful trail, bonehead moves.

The elusive and hard to access Chunky Gal trail was mostly conquered by Bob, Chuck and myself this last weekend.   The Chunky Gal runs for 21 miles from the AT near Standing Indian westward to Tusquitee Bald on the Fires Creek Rim trail, either end is currently at least 6 miles from any road, hence the hard to access descriptor.  When Bob and I hiked the Fires Creek Rim trail last Feb. we looked out over the course of the Chunky Gal and realized we had to come back.  Last summers hurricanes made access to the eastern end via Deep Gap too long an approach hike so we cut off the first 5 miles of the trail from the AT to US 64.  After much research and many emails we found someone who would shuttle us from Fires Creek over to Glades Gap on US 64 where the trail crosses.

After a 5 and a half hour drive down and another hour and a half messing with the shuttle we hit the trail early at 1:30 with cloudless skies and balmy temps (70’s).  Up and around Shooting Creek Bald (5000′, which we missed the obscure side trail to) and on west on beautifully maintained trail, hiking in shorts!  We took one of Bob’s famous short cuts and lost the trail for a while but finally reconnected as darkness closed in.  We found a nice campsite at Tates Gap out of the high winds with a beautiful view of Wayah and Wine Spring Balds (5400′) to the north.  A leisurely 6 miles today which was OK with me as my bum knee was acting up.  The “perfect food” and to bed with starry skies and incredibly warm temps.

37 degrees and still clear as a bell the next morning even though the forecast had been for a good chance of rain all day long.  We rolled on down the ridge with views on both sides, north over Nantahala lake and to Wayah Bald, south to lake Chatuge, Brasstown Bald in Georgia and staring at the big climb up to Tusquitee Bald (5200′).  A stray hunting dog with radio collar showed up mid trail and it started to follow us.  At a gravel road crossing Bob shooed it away as Chuck and I headed on up the trail.  Finally we made the last of the descent to the lowest point on the Chunky Gal at Bob Allison campground (3000′) where we stopped for lunch.  Too damned hot for hiking  (77 degrees) in the mountains in early March as we headed up the brutal 2200′ , 3.5 mile climb up to Tusquitee Bald (5200′).  Finally to the top and the views were magnificent as a few clouds began to roll in.

This is when things started getting hairy.  Bob and I had lunch on the open grassy area on Potrock Bald (5200′) last year  which is not quite a mile on from Tusquitee Bald and wanted to camp there this time around.  So we stopped there and when a few drops of rain fell we put up the tents.  As we hung out enjoying the view we noticed some thunderheads building to the east but figured they would die with the setting sun.

Then it started to rain more so we ducked into Bob’s tent waiting it out.  We began to hear thunder and saw several storms coming our way.  We decided that these too would pass by us to the South.  At one point the lightning got pretty close and it hailed hard for short time.  Finally it all stopped and it was actually clearing up and stars coming out,  so we decided it was safe to stay up on the highest peak around for miles!  We had dinner and Bob managed to get a fire going while we watched lightning striking mountains down in Georgia.  This was the bonehead move part, we should have moved camp while it was still light out.

We finally head to bed as the clouds are beginning to cover the sky again.  About 11:00 I woke up to the sky lighting up and went out to see that a huge storm was headed our way (remember the highest point for miles part) and lightning was hitting everything in its path!  Bob was non plussed about the situation as I lay in the bag counting the time between flashes and the thunder clap and thinking about putting my rain gear on and running down the side mountain.  Finally it moved past us and the rest of the night passed uneventfully. 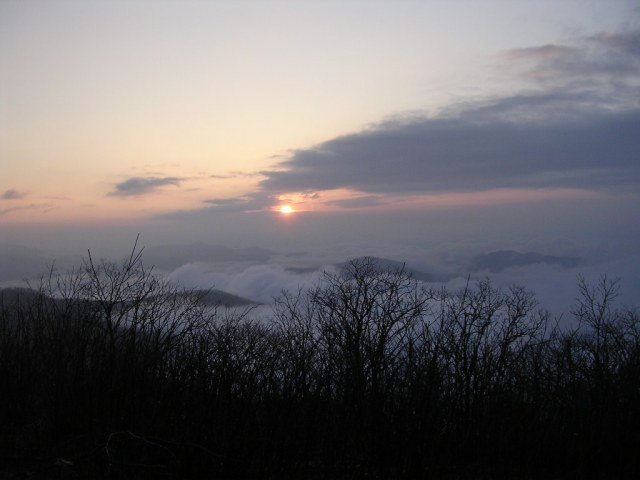 The next day dawned misty, with us above the clouds but beautiful up on the ridge.  Still balmy 37 degrees and we slowly ate breakfast and prepared to head down the steep hill to the car.  Limping down into the mist and fog.  On to Barleys are pizza and then home by dark.

A fitting if crazy end to the winters hiking season, Bob got to walk through snow for the 5th straight trip, we almost went  3 days without seeing another hiker, a new trail, I can still walk (kind of) and we didn’t get vaporized!